Do Hornets Like Vinegar? How to Use Vinegar to Trap Hornets

Do hornets like vinegar? is it a good and effective ingredient in a bait designed to entice and trap them for removal? Read this quick and easy guide to find out.

We often get asked about internet-inspired bug traps and baits. And one of those questions is Do hornets like vinegar?

One possible explanation for this is that vinegar, especially when it’s mixed with sugar, mimics how a fruit would smell. And since hornets are known scavengers of fruits, it makes sense that they’d be lured into traps with vinegar in them.

So read on to discover how you can use vinegar in your fight to keep hornets away, or at least to trap them.

How to Use Vinegar to Get Rid of Hornets

Unlike with other insects, we now know that vinegar bait is a good choice for hornet traps. You can make it using these simple house ingredients:

Now that you have your bait, let’s move on to constructing your trap.

Here are 2 variations of the most famous DIY hornet traps ever invented, the soda bottle trap.

Follow this guide in making a traditional soda bottle trap.

The more conventional trap makes use of a 2-liter soda bottle, a string and the vinegar bait.

Just like what the picture says, cut the neck off that 2-liter bottle. Take the cap off. Turn the neck upside-down, and place it back into the bottle. Make sure that there’s enough space at the bottom for the bait and for a pocket of air. This upside-down neck will act like a funnel that will invite the hornets in without giving them the option of leaving.

Then staple or glue the two pieces together. Punch two holes on two sides of the bottle, and tie a string into the holes so that you can hang the trap outside.

After that, grease the lower end of the bottle neck with oil, so insects won’t have a secure hold when they enter. Finally, just fill the trap with your bait and hang it outside to catch those hornets. 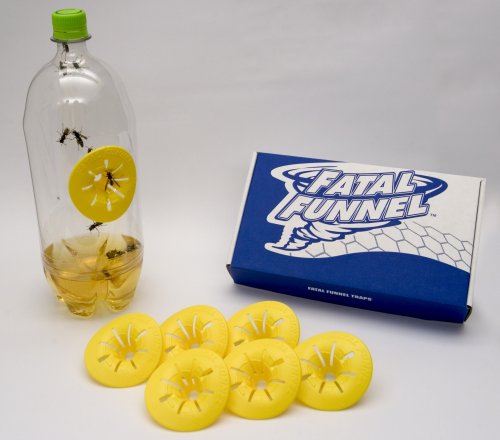 This version of the trap makes use of Fatal Funnels(amazon), durable plastic funnels that you can just insert into the bottle instead of cutting the top half and flipping it upside-down. These funnels are also reusable, with no chemicals and toxins whatsoever.

This trap is easier to make, compared to the conventional one. All you have to do is pierce a hole on one side of the bottle, and make sure that it’s big enough to fit the Fatal Funnel.

Pour in the bait, and seal the bottle by sticking the Fatal Funnel into the hole. Remember the keep the bottle’s cap on so that no hornet will be able to use that opening to escape.

Overall, both traps can give you a huge chance of clearing the hornet population in your house. Just hang a lot of them outside, and don’t be afraid to apply other treatments as well.

And when a friend asks you “ Do hornets like vinegar? ” You know what to tell him. You can use vinegar for traps that are quite effective against insects. And who knows? If you play your cards right, you might even catch a budding queen and prevent an entire colony from ever forming.