Carpenter Ant vs. Black Ant: Identifying and Telling Them Apart

In this guide we show you to tell black ants an carpenter ants apart. We look at some photos of each, describe their unique looks, the different habitats they live in and the different behaviors they show.

Although ants are pests in the home, credit where it’s due, they play key ecosystem roles. They burrow, which aerates the soil, and they break down decaying trees helping to remove them.

They also eat and spread seeds for plant growth and survival. Most of all, they are an essential link in the food chain, feeding many different animals that eat insects.

With that being said, they can cause a lot of damage in the home if left unchallenged, and they can get into food and supplies, making them an expensive house guest. They are also plain annoying.

Being able to identify what type of ant you have, whether it is a black ant or a carpenter ant, is the first step to determine whether you have an infestation or not.

So, what is the difference between a black ant and a carpenter ant?

Black ants and carpenter ants are very common across the United States and are the most common pest homeowners will deal with. The size is the most apparent difference to see, with the carpenter ant being up to three times bigger.

But unless they stand patiently side by side, you will need more than that to identify them, which is why we have created this guide.

To attack this enemy effectively, you need to do your homework. By understanding who they are and what they do, you will identify where their weaknesses lay.

Let’s start with a deep dive look at the carpenter ant.

Carpenter ants are generally dark in color, close to black, but sometimes appear as a reddish-brown or even a black and orange combination. As one of the larger species of ant in north America, they can grow up to an inch in length, though do vary in size.

As with all ants, they have six, long spindly legs. More noticeably, carpenter ants have large heads and a pronounced mandible. That’s pincer jaws to most.

Their thorax, the segment of the body below the head, is round, while their midsection is pinched and slim.

Their antennae, which they use for communication, is an essential part of an ants identity. They use them to connect with kin and fight those that aren’t. The carpenter ant has a long antenna with a kink in.

They are found all over the US as well as many other countries worldwide. The only slight difference country to country is the size of the ant. As with most things, like cars and landscapes, the ants in the US and Canada can be much bigger.

A carpenter ant colony will happily live both indoors and out. Entering through cracks and gaps in walls, windows, and doors, they will search for suitable lodgings.

A large colony may be nearby in the woodland that has dead trees. Carpenter ants prefer damp forest floors, which are perfect for them with an abundance of decaying, hollow moist wood.

Each colony will have up to 3000 ants. Females will branch out to create new settlements, establishing themselves as queen.

Once a suitable spot is located, she will lay eggs and hatch larvae, feeding them herself until their numbers are such that they can forage and feed each other. She will then solely reproduce until the colony is full. Then another female rinses and repeats elsewhere.

Carpenter ants are so-called because, yes, you guessed it, they work with wood (and hence are often confused with termites.)

Carpenter ant workers chew and burrow into timber creates the tunnels and living space they require. Making them a real threat to your house and the timbers it relies on for structural integrity.

Contrary to popular belief, they do not eat the wood that they destroy. They will leave piles of sawdust where they have burrowed.

Common spots to find them are window sills, under decking, and floor joists.  They will become active at sundown, so you may hear them rustling in wall cavities if you do have a colony infestation.

The first sign of a carpenter ant infestation sees ants, dead or alive. around your home. With the carpenter ant, this is more likely to happen at night.

Sawdust piles are another way of spotting an infestation, and these wooden leftovers are known as frass, and a sign of there being a carpenter ant nest.

You can also tap on walls throughout the home to see if it disturbs the ants and makes them rustle. They like damp, humid conditions. So near to bathrooms and kitchens is the most likely place, or anywhere that you might have or previously had a leak that is yet to dry out.

There are southeast Asian species of carpenter ants that explode when threatened. It is a defense mechanism to protect the colony and the other ants.

The carpenter ant also has a unique odor when crushed, similar to the odorous ant. Formic acid is released and smells like vinegar.

An ant can lift 20 times its own body weight. To put that in perspective, if a second grader were as strong as an ant, they could pick up a car with ease!

To get rid of a carpenter ant problem is a very specialised process that you will likely need to seek professional pest control help for.

However, you can check out our guide on hw to get rid of carpenter ants.

And we also have a detailed buying guide for the best carpenter ant killers you should check out also.

Black ants are black, mostly, but sometimes will appear as dark brown. They are one of the smaller ant breeds, and their colony worker ants are typically less than a quarter-inch in size. Their beloved queen is slightly bigger at just under half an inch in length.

The colony size is larger than the carpenter ants with an average of 4,000 to 7,000 workers. However, if you’re unlucky, some have come in at exceptionally higher numbers up to 15,000.

Black ants can look like the carpenter ant, with six legs being dark in color, etc. But there are small differences.

They have a small visible stinger at the tail end (harmless to humans). They also have an uneven looking thorax (behind the head) compared to the carpenter’s rounded even shaped one.

They also differ in their biological hierarchy. There are two types of ant, monomorphic and polymorphic. In simple terms, this relates to the size of the workers.

Black ants are mono, which means they are all the same size. Carpenters are poly, meaning the workers will differ in size. This is a little known detail regarding how to narrow down the ant type in question.

Black ants are found all over the world as one of the most prevalent ant species. Often referred to as pavement ants in the US, they are the ant that most people are used to seeing coming and going from their houses and gardens in search of food.

Because black ants nest in the outdoors and only come into homes for food, they are known to cause little damage within it.  So, before you reach for the bait traps or ant spray, maybe take a little time to watch them search and forage for food as a team.

Black ants are particularly attracted to sweet foodstuff and carbohydrates like bread. The various types of food offer different benefits to the colony at different times of the year.

After seeking out a food store that can feed many ants, they lay a scented pheromone trail back to the nest for other workers to follow.

In July and August, the hotter months, winged male and female ants emerge to carry out the mating flights for the reproduction of larvae. The flying ants are roughly two times the size of the workers.

The weather conditions will dictate when they emerge, but when they do, multiple nests in the same area will do so at the same time.

The males die after mating, whereas the females shed their wings and search for new nesting sites to raise their offspring.

As mentioned before, the ants are a vital part of the food chain, none more so than during these mating flights. Birds will eat the majority of ants in flight, so few females will make it to establishing new colonies.

You are unlikely to find an infestation of black ants in your home as a result of them setting up a colony within. There may well be numerous ants looking for food in your home if they have successfully foraged there before.

They will often enter and exit via gaps and cracks in walls, and these points can be targeted with an ant killer or repaired and sealed shut.

If you follow their convoy lines around your home, you will more than likely follow them to an underground nest outside. If you do, you can apply ant killer directly at the source, which will put an end to them using your house as a takeaway.

A little-known fact about black ants is that the workers are sterile, wingless females. Ants have different roles linked explicitly to gender and reproduction ability.

They also love to eat aphids and ‘milk’ them. By stroking the aphids with their antennae, they release the honeydew they have collected before eating them.

As you can see from the detailed table above, the two main differences between the carpenter ant and the black ant are their size and preferred habitat. While the carpenter will happily set up shop in your house, the black ants will just pass through after helping themselves to your snacks.

With a little practice, you’ll quickly be able to differentiate one from the other, and you’ll be able to impress the kids with super mommy or daddy knowledge.

In summary, these ants, although they look similar to one another, are very different when you get down to details.

The black ants, although unsightly, pose no real threat to you or your home. The carpenter, however, is a threat to any timber it lays claim to.

The black ant can effectively be treated with solutions such as baking powder or diatomaceous earth by a homeowner.

The carpenter, on the other hand, will probably need the robust services of a professional to ensure they are given their marching orders. 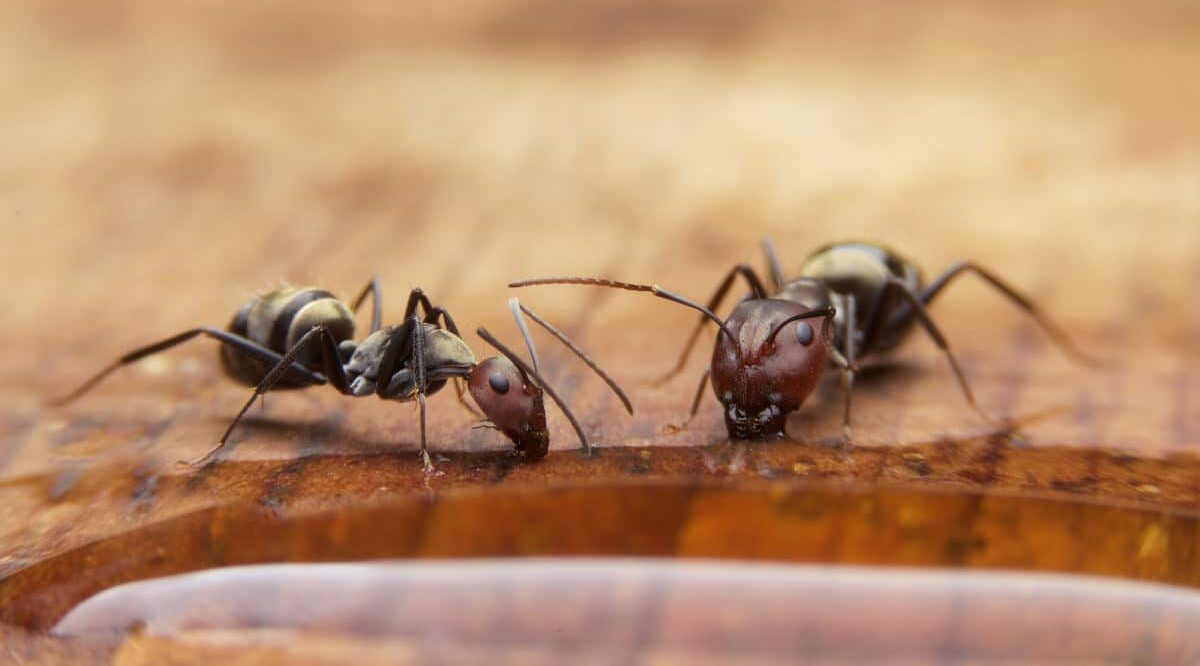